There are many reasons why you may not want to miss a visit to the History of Science Museum, one of which is – quite obviously- the astonishing collection of rare and ancient scientific instruments from the 17th to the 19th century. But once you get there, you will soon realize that it is a place that enlights you in many ways. The beauty of its architecture, the freshness of its English gardens and the views over the Lake Leman. Truly, the Pearl of the Lake!

The museum is located in the Villa Bartholoni, an architectural jewel built in 1830 and extensively restored between 1985 and 1992 within the park La Perle du Lac. The Villa is a beautiful example of Palladian style and geometrical simplicity while the interior decoration abounds of mythological scenes and an opulent choice of materials. Originally designed as an aristocratic summer residence, it hosts the History of Science Museum since 1964. Both the Villa and the Museum are listed in the Swiss Inventory of Cultural Property of National and Regional Significance.

The Villa owns its name from Constant and Jean-Francois Bartholoni, two established French bankers born in Geneva from an Italian family. But the Villa is not an isolate contribution of the Bartholoni family to the city of Geneva. Jean-Francois Bartholoni, who was fond of classical music, also founded the Geneva Music Conservatory (French: Conservatoire de Musique de Genève) in 1835, the oldest Swiss musical institution which stands on the Place Neuve. Later he became closely involved with the development of Gare Cornavin, Geneva central station (Geneva Cornavin station – shopping & opening hours |SBB) and significantly contributed to the unification of the Swiss rail network.

The Museum was created thanks to Raymond and Jacques de Saussure, another important family in Geneva with a particular connection to science through an honorable member, Horace-Bénédict de Saussure, the remarkable geologist, meteorologist, physicist and Alpin explorer of the eighteenth century (Horace Bénédict de Saussure – Wikipedia).

“Rarely was science more on people’s mind than this year” 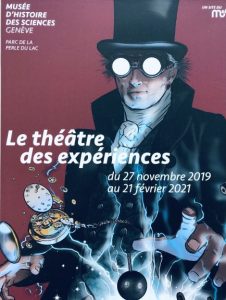 The Museum of History of Science has a small but significant collection of scientific gems. Below is a short description of some remarkable pieces and some savory anecdotes associated with them.

Astrolabe (MHS inv. 1051) – the prototype of the universe as it stood around the year 1300, representing Earth, Sun, the planets and moons as they moved graciously in their sidereal dance (https://en.wikipedia.org/wiki/Astrolabe). This was the very instrument of science in the middle ages (http://doc.rero.ch/record/306099/files/Terre_Soleil-2015.pdf), used for most varied tasks: to find a star, predict the duration of the day, locate a constellation, or determine the height of a building. Among the collection at the Museum of History of Science, the most curious is an astrolabe realized in two parts. The basis originating from Taza (Morocco) in the years 1323-1324, was completed with mobile dials with Sanskrit inscriptions. From the position of the stars we can infer a construction of the dials around 1860, most likely in India. 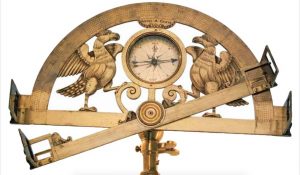 Graphometer (MHS inv.2162) – An instrument to measure angles, described for the first time in France in the 16th century (https://en.wikipedia.org/wiki/Graphometer). This is the basic tool used by surveyors to determine distances and heights. The graphometer of Pierre-Guillaume Martel (https://www2.unil.ch/viatimages/index.php?ajax=true&module=personne&lang=en&IDpers_ass=536)- which is part of the collection at the Museum of History of Science – is one of the first scientific instruments built in Geneva (http://doc.rero.ch/record/306097/files/T_es_Ou-2016.pdf).

The aquatic microscope (Cuff microscope) (MHS inv. 10) – This underwater microscope was used by Abraham Trembley (https://en.wikipedia.org/wiki/Abraham_Trembley) to study freshwater polyps in Lake Geneva – the hydra. The microscope was built by a renowned English instrument manufacturer, John Cuff, upon consultation with Trembley himself. Mounted on a mobile arm, to facilitate observations, the microscope led Trembley to publish a groundbreaking book in 1774, Mémoires pour servir à l’histoire d’un genre de polypes d’eau douce (https://www.amazon.com/Memoires-Servir-Lhistoire-Polypes-Cornes/dp/0341257397), describing the ability of hydras to regenerate and spawn new organisms, defying the ageing process. Thanks to these observations Trembley was awarded the Copley medal, and had access to the Royal Society in London and the Académie des Sciences in France. 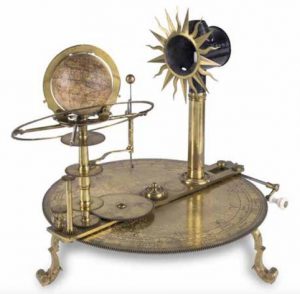 Tellurium (MHS inv. 649) – This is a splendid rendering of the mechanical understanding of Nature as it stood in the 18th century, following the theories on mechanics by Isaac Newton (https://en.wikipedia.org/wiki/Tellurion). Built by Abraham van Aken in Amsterdam in the 18th century, this instrument reproduces the relative movements of Earth and Moon around the Sun. The latter has a placeholder for a candle and the mechanisms are powered by a crank that drives the relative rotation of the bodies on a disk carrying the zodiac. The Museum of History of Science provides a DIY version of the tellurium for children (http://institutions.ville-geneve.ch/fileadmin/user_upload/mhn/documents/Musee_histoire_des_sciences/01-Tellurium.pdf).

Audible chronometer (MHS inv. 198) – The precise observation of the position of stars required timing of their passage at certain latitude and longitude in the sky. Performing observation in the night, the astronomer would not have a good sight of the dial of a classical chronometer. This is why the Observatory of Geneva was equipped with an audible chronometer: each second and minute was marked by a distinct chime, allowing the astronomer to count the precise time of an astronomic event to a fraction of a second. The audible chronometer which is part of the collection of the Museum of History of Science (https://www.facebook.com/ahs.geneve/videos/le-joli-son-dun-compteur-de-secondes-astronomique/485604338941220/) was built by Jean-André Lepaute in Paris in 1771.

Midday gun (MHS inv. 1884) – A small ingenious device, this miniature gun has a lens that can be placed so that the sun rays are focused at the exact midday on the priming vent (https://en.wikipedia.org/wiki/Sundial_cannon). The gunpowder ignites and a small explosion marks twelve-o-clock, the exact time to set your “montre de poche” in a city manic with mechanical precision like Geneva (https://www.youtube.com/watch?v=ETM7mYtZSFk&lc=z13ci3tb5v32c5nu0220z1szwwqdzfwvg).

Portable barometer (MHS inv. 967) – This is one of the many instruments used by the Horace-Bénédict de Saussure, the 18th century geologist, naturalist, initiator of meteorology, and climber of Mont Blanc in July 1787 (http://institutions.ville-geneve.ch/fileadmin/user_upload/mhn/images/votre_visite/site_mhs/1_Saussure_online.pdf). De Saussure brought this barometer to the top of the Mont Blanc and measured the atmospheric pressure at altitude (https://en.wikipedia.org/wiki/Altimeter). Comparing it to the atmospheric pressure in Chamonix, the start of the climb at a known altitude of 1035 m, he determined the height of the summit at 4775 m. A very good measurement compared to the present official value of 4809 m ! De Saussure barometer was built in Geneva by the manufacturer Jacques Paul after an invention of the Genevan physicist and naturalist Jean André de Luc (https://fr.wikipedia.org/wiki/Jean_Andr%C3%A9_Deluc).

Hair hygrometer (MHS inv. 1) – This is an ingenious realization of Horace-Bénédict de Saussure built in hundreds of units since its inception in 1783 (https://en.wikipedia.org/wiki/Hygrometer). A human hair is placed in tension, exposed to the atmosphere. One end of the hair is fixed, while the other is pulling on a string rolled around a wheel that drives an index on a dial. The hair is hygroscopic and changes its length as a function of humidity. The length change is converted to the motion of the index from 0% (dry air) to 100% (extreme humidity) (https://www.youtube.com/watch?v=W34yzNoBY04).

Voltaic pile (MHS inv. 373) – This pile, built in 1801, is one of the first samples that Volta himself may have built (https://en.wikipedia.org/wiki/Voltaic_pile) and donated to the family of Horace-Bénédict de Saussure, who died one year before. Volta and Bénédict de Saussure knew each other since 1777 and engaged in an intense scientific correspondence on electricity and associated phenomena.

Underwater hearing horn of Colladon (MHS inv. 93 et 203) – Thanks to this instrument, which looks much like a Swiss alphorn, the Genevan physicist Jean Daniel Colladon established with high precision the speed of propagation of sound in water. During his experiments on the Leman Lake in 1826, sitting on the edge of his boat, Colladon kept one ear next to the upper end of the partially submerged horn, and looked at his colleagues located on a second boat several kilometers away 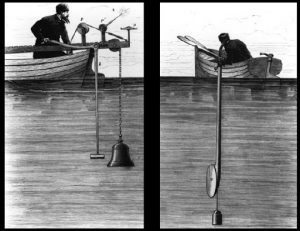 (http://institutions.ville-geneve.ch/fileadmin/user_upload/mhn/documents/Musee_histoire_des_sciences/aide_colladon.pdf). He then measured the difference between the time of arrival of a flash of light and the sound of a hammer hitting an underwater bell, both generated at the same time by the second boat. He could establish a sound speed in water of 1435 m/s, which is very close to the present reference value of 1481 m/s (Speed of sound – Wikipedia). 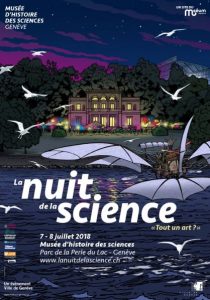 Geneva, a city of science and technology

The Museum of History of Science has much richness in its vaults, but it is not an isolated pearl in the enclave of the Leman lake. Thanks to his history of enlightenment (https://archive-ouverte.unige.ch/unige:117866) Geneva can offer today a true bounty of science and technology to the passionate and the curious. From the largest laboratory of high-energy physics, CERN, to smaller reminders that can be found strolling the pleasant old town where watchmaking has been fostering innovation for centuries. See below some of the most interesting locations, worth exploring!

Finally, the Township of Geneva has a rich program of outreach and scientific events for all taste. Below just a sample of what the city can offer (mainly in French):

“Week of the Brain”: https://www.semaineducerveau.ch/

“Night of the Bats”: http://www.ville-ge.ch/mhng/cco

Other museums with remarkable collections in Switzerland

Other science museums in Europe

Discover other beautiful sites worth visiting while in Geneva

This page has been created by Sabrina Campana as part of her diploma of advanced studies – DAS en communication digitale, expertise web et réseaux sociaux 2020/2021 from the University of Geneva, under the supervision of Florian Bessonnat, SEO specialist and co-author of the book «Tout savoir sur le référencement».

Among the participants of the 2020/2021 edition of the DAS en communication digitale, expertise web et réseaux sociaux you may want to check the following profiles: